What are everyone's thoughts on the player having their own hands visible?

One pair of hands would be fine for all spells, would just need some variety in animations. Maybe a second pair for when player has a sword out, I'm not sure on which would be easier.

Some gestures for various spells:

I don't know if this is possible but would be pretty interesting if it was, but to create the hands as ragdolls. So they have no fixed animations.

Wouldn't it then be easier to apply multiple combinations.
Also as for the gestures I would like something like bioshock. or the first photo you posted. Where the hands are more open, also following the avatar theme there they also use the whole hand if you know what I mean not just locking a few fingers in position like the second picture.
Top

Making the hand animations dynamic would be much harder. For the time being I think fixed animations is a better options.

Some gestures, like the pointing one, are appropriate for different spells. That pointing one might be used when someone is targeting lightning (like ET artillery), and the first one for shooting a fireball.
Top

Definatly visible, I like the idea of flamed hands or hands ready to throw a bolt 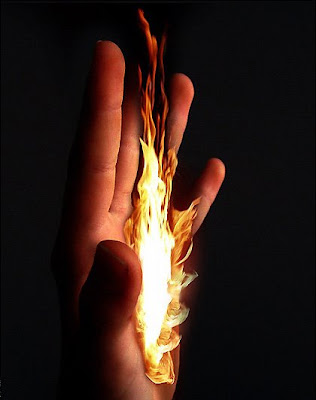 Cool pics (minus the dove and cross and stuff)
I do hope to have something similar while the spell is being fired.

When the player is casting it (preparing it to be fired), we are planning to use fractal sprites attached to the player's hands to represent the magic.
The colors and shapes will be associated with the elements, and the effect will be blended to reflect what the player is currently casting.

This screenshot shows the current effect (remember, this is just a Xreal player model) some fractal sprites with some lighting effects.

We haven't made the sprites for all the elements yet, as it takes a while to generate a fractal which looks good and sort of reflects the element (even some of the ones pictured might be changed).

Still to come is blendings between elements, and some fancy GLSL effects.

Once the spell is cast, we might have something like those flaming hands when that spell is selected. Firing it will have some kind of throwing animation (hopefully varying to suit the spell).
Top

they look great! I remembered playing bioshock and here might come some nice inspiration
http://www.joystiq.com/photos/bioshock- ... 7/#1499467

Yeah, that last hand looks pretty good. Probably a bit large though, we only want the hands to take up a small area of the screen.
Top

Awesome - fractal sprites
sounds cool, I think its important that players should have some sense of what other players are holding
Top

Yes, colors and fractils will reflect the elements they're casting.

Once they've casted a spell, and its ready to shoot (they may have several spells in this state) theres will be an icon above their head visible to players on their team.

Icons for all the spells (about 50) is a big job that hasn't been started yet.
The same Icons will also also appear on the HUD of the person who has the spell ready to shoot.
Top
Post Reply
10 posts • Page 1 of 1